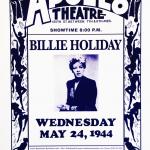 New York, NY March 2, 2015 – The Apollo Theater in collaboration with Absolutely Live Entertainment will celebrate the 100th birthday of Billie Holiday with presentations honoring the late jazz and blues singer and featuring two-time Grammy winning musician Cassandra Wilson. On Monday, April 6th Billie Holiday will be inducted into the Apollo Walk of Fame, joining other legends honored by the Theater including Ella Fitzgerald, James Brown and its most recent inductee, Louis Armstrong. Musician Cassandra Wilson and Apollo president and CEO Jonelle Procope will present the legendary singer‟s Walk of Fame plaque during the ceremony. Accepting the honor on behalf of The Estate Of Billie Holiday, which is managed by The Bicycle Music Company, will be one of its managing partners, Steven Salm. Along with the Walk of Fame ceremony, events honoring the late songstress include the release of Cassandra Wilson‟s upcoming Legacy Recordings release, Coming Forth By Day (April 7th) and a special concert, Cassandra Wilson: A Celebration of Billie Holiday, which will mark Wilson‟s first time headlining the Apollo (April 10th).

The Apollo Theater played a major role in the emergenceof jazz and is honoring that legacy, as well as continued innovations within the genre, by inducting Ms. Holiday into the Walk of Fame. Apollo‟s Walk of Fame honors legendary performers who have helped shape the American music landscape and build the Apollo into one of the world‟s most enduring cultural institutions. Billie Holiday, born Eleanora Fagan, had a special relationship with the Apollo Theater dating back to the Theater‟s founding year, 1934. The then, 19-year-old performed “If the Moon Turns Green” and “The Man I Love” to a moved crowd. Over the course of her career, Lady Day would go on to perform at the iconic venue at least 23 times. In the late 1940s, after she lost her New York City cabaret card, the Apollo remained one of the few NYC venues where Ms. Holiday could perform.

“It is an honor to celebrate Billie Holiday and her many contributions to the jazz and blues world, on her centennial birthday,” said Mikki Shepard, Executive Producer for the Apollo Theater. “The Walk of Fame is our way of paying tribute to the Apollo Legends who have transformed the American entertainment landscape. Billie Holiday without a doubt is the personification of this. Her voice and presence permeated mainstream culture which lead to her becoming the most influential jazz singer of her day and among the most esteemed vocalist of the century. These initiatives serve as part of the Apollo‟s mission to use its legacy to inform and support contemporary artists.”

Coinciding with the Theater‟s Walk of Fame induction, Cassandra Wilson will release her new album Coming Forth By Day (Legacy Recordings), on April 7th, which would have been Ms. Holiday‟s 100th birthday. The album features wholly original interpretations of 11 songs that Billie Holiday recorded over the course of her career and an original by Cassandra called “Last Song (For Lester).”

“Coming Forth by Day is an homage dedicated to the beauty, power, and genius of Billie Holiday. A collection of musical spells, prescriptions for navigating the dubious myths surrounding her life and times, this record is a vehicle for the re-emergence of Billie's songbook in the 21st century," said Cassandra Wilson.