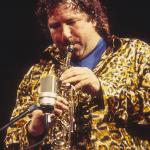 October 1, 2015: The unexpected silence left by the recent passing of Bob Belden—whose ceaseless stream of musical projects, production credits and boundless energy earned him the respect of an international circle of musicians and fans—will be filled with music, memories, and much more on Monday, November 2 at (le) poisson rouge, 158 Bleecker Street, New York City. CELEBRATING BOB BELDEN is the title of this special memorial evening, which is free and open to the public.

Doors open at 6:30pm, the event will begin at 7:30pm and run through the evening, with three different groups (The Treasure Island Band, Animation/Imagination, Animation), all originally formed by Belden performing music that he composed and featuring musicians he recruited, as well as special friends like Wallace Roney. Belden’s longtime confidante and collaborator, trumpeter Tim Hagans, will serve as the musical director of the evening. Friends and family members will speak and share stories, in person or by video, including Chick Corea, Tim Ries and Herbie Hancock. The event is lovingly produced by Belden’s sister Elizabeth Belden Harmstone, Tim Hagans, Julie Lokin and Danny Melnick under the auspices of Audiences for the Arts, Inc.

Belden was a true rara avis: a student of music history who was committed to leaving his own mark on the musical timeline. He wrote music and led his own ensembles—including The Treasure Island Band, Imagination and most recently Animation—the group with which he recently toured Iran to sellout crowds, generating major headlines (“The first time an American musician had played in Iran since 1979,” jazz critic Ben Ratliff noted in The New York Times.). Heearned six GRAMMY® Award nominationsfor his own recordings, and as a reissue producer and writer of especially insightful liner notes; of these, he won three. His most celebrated albums include the critically acclaimed orchestral jazz suite Black Dahlia (a Downbeat magazine “Masterpiece” in 2001), and his blending of world folk sources with the music of Miles Davis: Miles from India (2007) and Miles Español: New Sketches of Spain (2011).  (“As a bandleader and record maker, he often looked for ways to connect the jazz tradition to other energies,” Ratliff also wrote.)

Born James Robert Belden in Evanston, Illinois in 1956 and raised in South Carolina, Belden began his career playing in the reed section of Woody Herman’s famed Third Herd big band. In 1983, he moved to New York City where his career grew wide and deep. In the 1980s, he served as a sideman with Donald Byrd and Mel Lewis, as staff arranger for ESPN, and scored films. In the ‘90s, he became an artists-and-repertoire (A&R) executive at Blue Note Records, and arranged and/or collaborated on albums with such jazz greats as Joe Henderson, McCoy Tyner, Herbie Hancock, Nicholas Payton, Paquito D’Rivera, Wallace Roney, James Moody, Tom Harrell, Renee Rosnes, and Benny Green. He created albums that found the jazz spirit in music by an unlikely array of giants: from Puccini, Prince, and the Beatles, to Miles and Sting. He spearheaded reissue programs that brought new life to timeless recordings by Miles, Weather Report, Mahavishnu Orchestra, and countless others.

Released just this past week by RareNoise, Machine Language is the latest—and now last—project by Belden’s youthful Animation ensemble. The album is a rock-jazz meditation on man and artificial intelligence conceived and composed by Belden, narrated by Kurt Elling, and featuring the saxophonist along with special guest bassist Bill Laswell, plus Animation keyboardist Roberto Verastegui, trumpeter Pete Clagett and drummer Matt Young.

Belden was unusually wide-ranging in his cinematic and literary tastes, and up-to-date on matters of music and technology. His memory for musical details—melodies, voicings and rhythms, as well as personnel and dates—was uncanny. He did not survive long as a staff producer. “He was a vocal critic of the state of the music industry, music education and other aspects of the world in which he traveled,” journalist Jeff Tamarkin pointed out in JazzTimes, “Yet he traveled easily within it because he understood it so well, and was loved and respected for his individuality and the sheer magnitude and breadth of his talent.”

When Belden died from a heart attack on May 20 this year, obituaries appeared in The New York Times, Washington Post, JazzTimes, and other national and international publications in the UK, Brazil and Venezuela. In Downbeat, John Ephland wrote:

“The cat had lots of appetites… during his all-too-short lifetime, Bob Belden accomplished 10 times as much as the average person would in a lengthy one. Getting to know him, one couldn’t help but be stunned at the breadth of his many passions and projects—all driven by a generous spirit, a huge heart and boundless, soulful imagination.”

Bob Belden will be missed, and his musical contributions will continue to be celebrated.