Upcoming Events / May 2011 / A Celebration of Kate McGarrigle 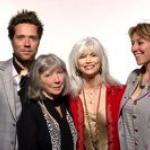 A Celebration of Kate McGarrigle

The family of Kate McGarrigle, the Canadian singer and songwriter who died last year, has announced two tribute concerts in her honor. Her children, Rufus Wainwright and Martha Wainwright, and McGarrigle’s sister and longtime musical partner, Anna McGarrigle, are scheduled to perform on May 12 and 13 at Town Hall in Manhattan. They will be joined by their third sister, Jane McGarrigle, as well as by Norah Jones, Teddy Thompson, Jimmy Fallon, Emmylou Harris, Antony, Justin Vivian Bond, Sloan Wainwright, Jenni Muldaur, plus Michel Pepin on guitar, Chaim Tannenbaum on mandolin and banjo, and Joel Zifkin on violin, all of whom were regular members of the McGarrigle band. “Everyone who met my mother, no matter how briefly, was struck by her worldly character matched with an otherworldly artistic aura,” Mr. Wainwright said of the tribute in an e-mail. “It’s all in the songs now. I can’t wait to hear them performed by all of these incredible artists.” Ms. McGarrigle learned she had a rare form of cancer in 2006 and died at her home in Montreal in January 2010. She was 63. All proceeds from the shows will go toward the creation of the Kate McGarrigle Sarcoma Research Fund, in association with the Sarcoma Foundation of America.