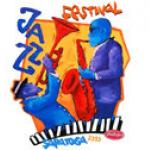 Presented in partnership with the Saratoga Performing Arts Center, this festival is like no other: two days & nights, two stages, picnics, reserved seats & tents on the lawn, free parking, sun & shade, jazz, blues, soul, Latin and more. With an inside seating capacity of 5,200 and lawn seating of 20,000, and just three hours driving time from Boston and New York, SPAC's Jazz Festival draws thousands of jazz aficionados from across the Northeast and the US.