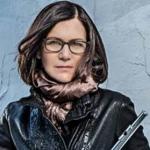 NYC flutist/composer Jamie Baum has toured the US, and over 28 countries performing at major festivals and concert halls. Her solo work, septet, and compositions have all been awarded consistent accolades from the top critics and polls, and she has been nominated by the Jazz Journalists Association for Flutist of the Year seven times. Chosen by the US State Department to tour South America, Europe and South Asia, several of Baum’s compositions have been inspired by her travels, including “Nusrat,” a nod to Qawwali vocalist Nusrat Fateh Ali Khan, and “Monkeys of Gokarna Forest” inspired by monkeys in Kathmandu.

“A New York flutist, Ms. Baum… is into tone color and timbre and the blending of languages, jazz, and 20th-century classical and Afro-Latin music. But she’s got an elegantly persuasive composing hand… she makes what she takes from classical minimalism and Indian qawwali mix together and feel natural.” – New York Times