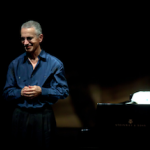 Keith Jarrett has come to be recognized worldwide as one of the most creative and uncompromising musicians of our times - universally acclaimed as a pianist and improviser of unsurpassed genius. Over the past 45 years, his transcendent improvised solo piano concerts and recordings have helped to redefine the piano in contemporary music incorporating a broad spectrum of musical languages from jazz and classical to folk and ethnic music traditions. This body of improvised piano music is without precedent withThe Koln Concert“ celebrating its 40th Anniversary in 2015 as the best selling solo piano recording in history. His most recent ECM recording, A Multitude of Angels,  is a 4-CD box set featuring four complete improvised solo concerts recorded in Italy in October 1996 in Modena, Ferrara, Torino and Genova that Keith Jarrett has called “a pinnacle of my career”.