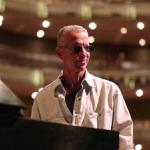 Keith Jarrett returns to Carnegie Hall for another stellar evening of solo piano improvisations. This concert celebrates the release of one of Jarrett's finest live solo recordings of his career, "Rio" which was released on November 8th by ECM Records. "Rio" was recorded in the spring of 2011 and was "fast tracked" to release.

Keith Jarrett's Carnegie Hall performance will be his only North American solo concert this winter.