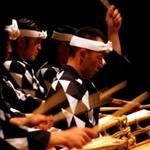 Sine 1981, KODO has given over 3,300 performances on five continents and has introduced countless audiences to its peaceful, world-centered vision. The word 'Kodo' is a homonym for 'heartbeat' - humanity's most fundemental source of rhythm. The taiko drum, in the hands of these master drummers, has an astounding organic power.