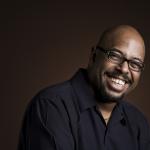 The Monterey Jazz Festival 55th Anniversary Tour Celebration concluded on Tuesday, April 30 in Santa Cruz, CA, where it all started in early January. The band was supposed to perform in Baton Rouge on March 24 but got snowed in in Kansas City. This new date will feature a trio of bassist Christian McBride, pianist Benny Green and drummer Gregory Hutchinson in a salute to one of the ledendary figures in jazz, and of the history of the Monterey Jazz Festival, the bassist and composer Ray Brown.