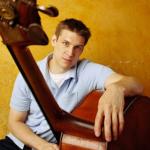 Recent winner of Downbeat’s Rising Star Composer award, bassist Ben Allison is one of a few band leaders working in jazz today who has developed his own instantly
identifiable sound. Known for his inspired arrangements, inventive grooves and hummable melodies, Ben draws from the jazz tradition and a range of influences from rock and folk to 20th century classical and world music traditions, seamlessly blending them into a cinematic, cohesive whole.

Joined by the graceful guitarist Steve Cardenas and the inimitable Ted Nash on saxophones, the trio explores the music of the iconic jazz guitarist Jim Hall in this acoustic concert.

Allison has been called “one of today’s best young jazz musicians” by the Boston Globe and a “visionary composer, adventurous improviser, and strong organizational force on the New York City jazz scene” by JazzTimes.

Ben Allison/Steve Cardenas/Ted Nash (Friday) This low-key repertory tribute — featuring the music of the multi-reedist Jimmy Giuffre and the guitarist Jim Hall, who worked together in an influential chamber-jazz trio of the late 1950s — will feature musicians well attuned to that spirit of economy and openness. On guitar is Mr. Cardenas; joining him are Mr. Nash, a saxophonist, and the group’s bassist and director, Mr. Allison. At 7 p.m., Rubin Museum of Art, 150 West 17th Street, Chelsea, 212-620-5000, rubinmuseum.org. (Chinen)