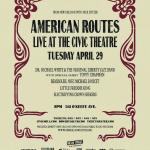 American Routes On The Road

“In the history of American radio, no series has come close to Nick Spitzer’sAmerican Routes in exploring the many streams of this nation’s music.”

Now in its 15th year on the air, broadcasting on 500 stations across the country with close to one million weekly listeners, American Routes continues to explore the shared musical and cultural threads that weave American music together in this diverse and vast country.

Now American Routes is hitting the road with a new live theater show!

Nick and the team at American Routes have used the Radio format for the last 15 years as their primary medium to explore American music.

American Routes On The Road is a theater show that takes that simple mandate – to explore the roots of American music – and brings it to life on stage. Using live performances, video documentary, on-stage artist interviews and insight from Nick, the audience willride legendary inter-continental trains and follow our rivers and highways along the paths that music forged through our nation.