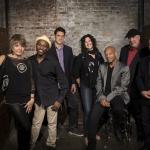 See above link for more information on the NEWPORT JAZZ FESTIVAL 60th ANNIVERASRY IN NEWPORT, RI