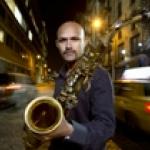 NEWPORT, R.I. (AP) -- The Newport Jazz Festival is adding a third day of music to mark its 60th anniversary and will focus that day on new and emerging acts, part of a plan to ensure the event does not become a "museum piece," festival producer George Wein said Wednesday.
At least one already familiar name — John Zorn — will be on hand to help kick off one of the world's top jazz festivals when it begins during the day, Aug. 1, rather than its traditional evening start.
Zorn will bring his "Masada Marathon," a collaboration of groups performing in a variety of styles, including klezmer music and string trios.
"When we first came to Newport, jazz had an aspiration to be accepted as an art form," said Wein, 88, who first produced the festival in 1954 at the invitation of a Newport socialite.
Now, 60 years later, jazz has established itself, he said, and the festival has an obligation to present young and unknown talent to a wider audience.
Decades ago the festival ran as many as four days. But since the 1980s, it's covered only two full days. Typically, the festival begins on a Friday night with well-known musicians performing at the International Tennis Hall of Fame, then continues for the weekend at Fort Adams, a waterside state park that provides a spectacular setting for the music.
The festival next year will begin at 11:30 a.m. Aug. 1, a Friday, at Fort Adams; it will then continue that evening at the Hall of Fame and return to Fort Adams on Aug. 2 and Aug. 3, Wein said.
Ticket sales have started for some of the events. Tickets for the Friday event will cost less than for the weekend.
The additional day of music is funded in part by a $40,000 grant from the Rhode Island Foundation, and the festival's main sponsor is Natixis Global Management.
Among the acts to be featured Aug. 1, along with avant garde composer Zorn, will be saxophonist Miguel Zenón and Darcy James Argue's Secret Society. While Zorn is an established artist, he has recently gained icon status, Wein said.
The Friday night concert will be a major production reflecting the history of the 60th anniversary, Wein said. The full program will be announced in January.
The jazz festival and its sister folk festival are run by a nonprofit foundation, set up by Wein in 2010 and established with the intent to keep them both going long after he is gone. The Newport Festivals Foundation is allowed to receive tax-deductible contributions.
Last year's jazz festival attracted more than 17,000 people. The festival has showcased jazz superstars, including Ella Fitzgerald, Miles Davis, Dizzy Gillespie, Billie Holiday and Duke Ellington, but is also known for providing music fans a venue to see established stars perform alongside new talent.
The folk festival, marking its 55th anniversary next year, added a third day this year and drew an additional 8,000 people on that day, Wein said. Next year's folk festival will be held July 25-27. The lineup has not yet been announced and tickets are not yet on sale.