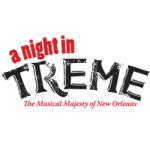 David Simon and Eric Overmyer’s acclaimed HBO series Treme (pronounced Tre-may) isn’t about the New Orleans music scene per se. But as a gritty, affectionate and ground level post-Katrina character study centered on the Crescent City neighborhood that gives the show its name, infectious New Orleans grooves tie the drama together and shine a welcome national spotlight on a place where music is inextricably woven into the fabric of every day life. “A Night In Treme” showcases several of the irreplaceable artists who have appeared on the series as themselves, including the powerhouse Rebirth Brass Band, an institution for nearly three decades. Rebirth will be joined by other New Orleans mainstays, such as vocalist and trumpeter Kermit Ruffins, clarinetist Dr. Michael White, Mardi Gras Indian chief and alto saxophone star Donald Harrison Jr. and trombonist Big Sam Williams. Wendell Piece, who plays the smooth talking trombonist Antoine Batiste on Treme, provides narration on the neighborhood’s history and the struggle to rebuild houses and lives after Katrina. It all adds up to a vivid musical portrait of a city that has shaped American (and international) music for more than a century.

"a night in Treme" Flier