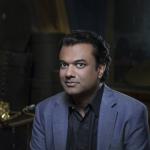 Through a series of critically acclaimed releases over the past decade, Rudresh Mahanthappa has explored the music of his South Indian heritage and translated it through the vocabulary of his own distinctive approach to modern jazz. On his latest release Bird Calls, available February 10, 2015 on ACT, Mahanthappa trains his anthropological imagination on an equally important cultural influence: the music of Charlie Parker. With a stellar quintet of forward-thinking musicians, which includes some long-time collaborators as well as trumpeter Adam O’Farrill, Mahanthappa offers an inspired examination of Bird’s foundational influence and how it manifests itself in a decidedly 21st-century context.

"On Bird Calls, alto saxophonist and composer Rudresh Mahanthappa takes on the music of Charlie Parker in a personal and profound way, accompanied by his whip-smart, uber-hip and youthful backing band. Let's face it, folks; this is the sort of thing a jazz fan's daydreams are made of. The result doesn't disappoint; Bird Calls is a masterpiece, and will certainly grace many a critic's year end "Top 10" list."