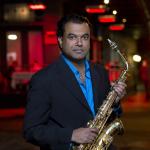 Few musicians share the ability of saxophonist/composer Rudresh Mahanthappa to embody the expansive possibilities of his music with his culture. Time and again, Mahanthappa has eloquently displayed the capacity to absorb numerous styles and genres of music, combine them with the language of modern jazz, and emerge with a new form still recognizably jazz.

What has materialized is a sound that hybridizes progressive jazz and South Indian classical music in a fluid and forward-looking form that reflects Mahanthappa’s own experience growing up a second-generation Indian-American. Just as his personal experience is never wholly lived on one side of the hyphenate or the other, his music speaks in a voice dedicated to forging a new path forward.

The manifestations of that trajectory include the latest version of his quartet setting, currently named Gamak, and now featuring guitarist David “Fuze” Fiuczynski, whose own microtonal vocabulary has opened new possibilities for Mahanthappa’s compositional imagination. The band, which includes bassist Francois Moutin and drummer Dan Weiss, issued its first release on January 29 and began an extended period of live performances. This NYC concert is their official "CD Release" event.