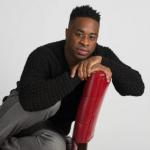 Musicians have a powerful and fearless tradition of speaking to the challenges of their time: Nina Simone’s Civil Rights anthem “I Wish I Knew How It Would Feel to be Free,” Simon and Garfunkel’s “Bridge over Troubled Water,” Stevie Wonder’s “Love’s In Need of Love Today,” are well-known examples. Award-winning pianist Damien Sneed, joined by trumpeter Keyon Harrold and other special guests, leads and stars in this final concert of Summer Concert Series: JAZZ & CHIHULY.

The New York Times’ film and music critic, Stephen Holden, has lauded Sneed’s ability to turn traditional gospel tunes into “concert art songs.” An acclaimed artist with a global reach, Sneed has performed in Europe, Japan, the U.S. Virgin Islands, South America, Africa, and the United States. He has performed at historic national and international events, including the 2012 Olympics in London and activities related to the Inauguration of President Barack Obama. Sneed performed in Washington, D.C. at A Celebration of America at the Kennedy Center for the Performing Arts on the eve of President Obama’s Inauguration and Martin Luther King, Jr. Day in 2013.

Damien Sneed is a multi-genre recording artist and a 2014 recipient of the prestigious Sphinx Medal of Excellence honor, which is presented annually to emerging Black and Latino leaders in classical music. Sneed has also garnered attention in a wide range of other musical genres, including jazz, gospel, pop, R&B, opera, and musical
theatre. A pianist, organist, vocalist, conductor, composer, producer, arranger, and arts educator, Sneed has worked with legends such as Aretha Franklin, Wynton Marsalis, Jessye Norman, Stevie Wonder, Diana Ross, and Ashford & Simpson, Wycliffe Gordon, and Eric Reed.

Keyon Harrold was raised in the now infamous Ferguson, Missouri. Harrold has developed a reputation as one of the world’s most sought-after, emotionally electric young trumpeters on the scene. A graduate from the Mannes Jazz Program at the New School University, Harrold is an eclectic trumpeter/music producer/arranger/songwriter that who has been featured onnearly 100 albums ranging from jazz, R&B, pop, gospel, blues, and hip hop. He has toured and recorded with or produced for some of the world’s best artists and ensembles, including Jay-Z, Beyoncé, Common, Erykah Badu, and Lauryn Hill. He is featured as the trumpet sound of Don Cheadle playing Miles Davis in the Miles Davis biopic Miles Ahead.