A Night in Treme (The Musical Majesty of New Orleans) 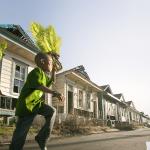 A Night in Treme (The Musical Majesty of New Orleans)

THIS CONCERT IS POSTPONED TO A SPRING 2014 DATE TBA.

The heartbeat of New Orleans sounds throughout the Treme neighborhood—familiar to millions through the popular HBO series that bears its name. Home of Congo Square, birthplace of a great brass band tradition, Treme has been a source of African-American music and culture for as long as Crescent City cooks have been serving red beans and rice on Monday nights. Join us for a vivid musical portrait of a city that has shaped music throughout America and the world for more than a century. Topping the bill is New Orleans legend—and Twin Cities favorite—Preservation Hall Jazz Band, along with a cast of the city’s all-star musicians: drummer Stanton Moore of the band Galactic, guitarist Leo Nocentelli, singer-songwriter-instrumentalist Ivan Neville, plus their very own artistic director of jazz and trumpeter extraordinaire, Irvin Mayfield.